Today’s recipe is brought to you by Alex, Dinners With Dan‘s newest featured contributor!

Are you ready?  This week, Dinners With Dan is going international.

First up we we have a wonderful recipe from my very good friend Alex who is currently studying abroad in France!  I hope you get as much of a kick out of this recipe as I did =).

The most difficult part of being a college student is finding ways to eat healthy. I know my friends and I will go to events we don’t care about at all just because they had a flyer saying “Free Food”. It’s a real struggle, especially if you’re studying abroad in a country you have never been to before, and you can’t recognize the labels on the food that you buy. However, my philosophy is: if it tastes good, doesn’t make me sick, and is cheap, I’ll usually eat it again.

I’ve been studying literature in France for the past month and there is a small grocer down the street from my dorm. Basically, once a week I go to the grocer with an empty backpack, grab whatever looks good, and hope I live to see the next day. In keeping with my newest tradition of “trying new things” (which is a phrase middle-aged women use as an excuse to date 20-somethings) I decided to use our disgusting kitchen for more than just swallowing spoonfuls of Nutella with milk and actually cook something!

How to Make It:

In the first pan, which you should lubricate with butter or margarine, (I used some sort of sunflower oil? I don’t know. I should be taking language studies more seriously) put a seasoned chicken fillet. I cook it on a low heat and season it lightly on both sides with salt, crushed pepper, and a little bit of garlic salt, but not too much since we will be adding garlic cloves as an ingredient to the potatoes.

Keep the heat low on the chicken, and keep the pan lubricated. Turn the fillet every few minutes until brown.

While cooking the chicken, wash your potatoes but do not skin them. Instead, slice them finely until they are in little round, nearly transparent slices. Not too thin, but you should be able to see the shadow of your finger behind it as you hold a slice. For some added spice, you can put some chili powder on the potatoes, which will also add an interesting color.

Now chop (but don’t dice) some onions. I like to use white or green onions because the color contrasts with the potatoes. I know, it’s odd, but I like my food to be colorful AND delicious.

Peel the half-clove of garlic and do whatever it is that you do with that. Some crush it, some chop it, and some just stick the whole clove into the pan. That’s cool, man, I don’t judge. I personally prefer to chop my cloves, not because I’m lazy, but because it gets the most out of the flavor. Also, I’m lazy.

Lubricate a second pan with the sunflower? oil and sauté the potato, onion, and garlic mix.  Keep seasoning with salt and pepper while it is cooking. If you can put your fork through a larger piece of potato with ease, and the edges of the onion are brown or crispy, you know it’s done, but it really depends on how much you like your food cooked. I like all of my food to be a little crispy (my dad always said, “You know a Love is in the kitchen when the fire alarm goes off”).

In a pot, you’re going to want to start cooking your tomato puree on an extremely low heat, and keep stirring. Do not stop stirring until the puree is bubbling, but remove the pot from the burner if it starts to smoke more than a little bit. You want it hot, but you don’t want to burn it. I always add seasoning for puree: rosemary, basil, peppers, maybe a dash of hot sauce for that southern flavor. But for the most part, when it comes to spices, you’re going to want to [SPOILERS] take a page out of Heisenberg’s book, and “Tread lightly.” [/SPOILERS]

The most important thing is to keep things moving. Keep stirring the pot every 30 seconds or so with a wooden spoon. For the chicken, once one side becomes brown, flip it with a metal or plastic spatula at least 4 times to make sure it is fully cooked, but don’t cook it more than 15 minutes on low heat or it WILL become dry. For the potatoes, you don’t really want to stir it or flip it with any sort of tool, just use the handle to flip the mixture in the pan manually. If you can’t do that, just take the handle and swirl this mixture around. It takes a lot of practice to be able to do it correctly without losing a slice of potato or onion, but there’s really no such thing as “germs” in France, so if you drop a piece on the stove, don’t be afraid to pick it back up and put it back in the pan.

When everything is nice and brown, turn off the burners and layer the potato/onion/garlic mixture on a plate with a fresh coat of shredded cheese, maybe a little more than half of whatever you set aside to prepare the meal. Immediately after layering the cheese, place the chicken atop of the cheese (you can slice the chicken if you wish, but I didn’t) to make sure that the cheese gets nice and gooey, and begin to pour the puree atop of the chicken and potatoes. Move around the pot as you slowly drip the puree, making sure that it gets between the chicken and the potatoes for an even spread. Finally, sprinkle the rest of your cheese atop of the dish and add another dash of pepper, et voilà! A cheap, easy meal that you can recreate over and over in any country, on any budget.

My study abroad buddies love this one because potatoes are very cheap here, and cheese is pretty much used in every meal.  I call it Poulet de Terre (Le repas des Pauvres et Paresseux), or: Chicken of the Earth, The Meal of the Poor and Lazy. It pairs nicely with a good French cigarette and glass of Muscat rosé, unless my parents are reading this, in which case it pairs just as nicely with a glass of 2% milk and my homework.

Thanks so much for this recipe, Alex!

Until next time, happy cooking! 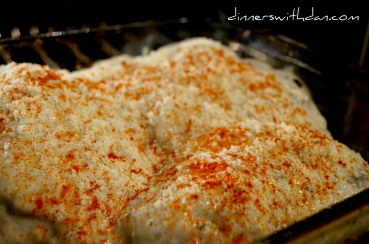 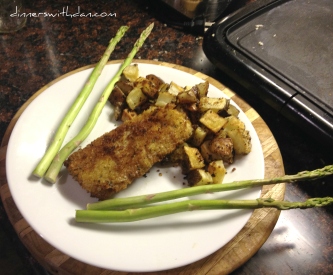 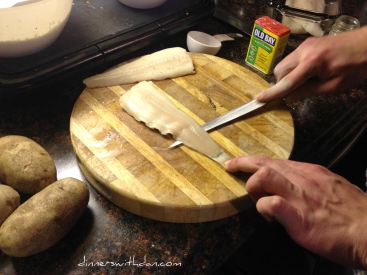 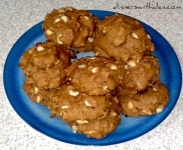 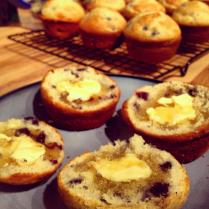 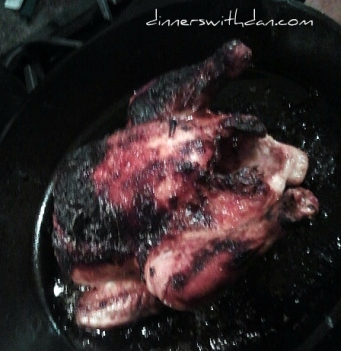 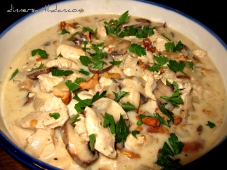 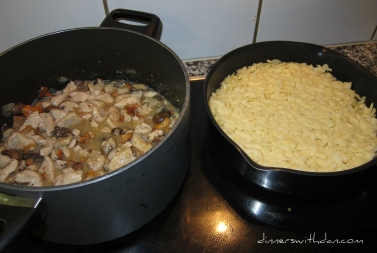 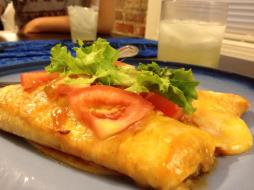 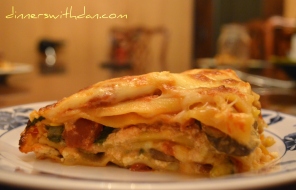 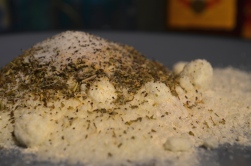